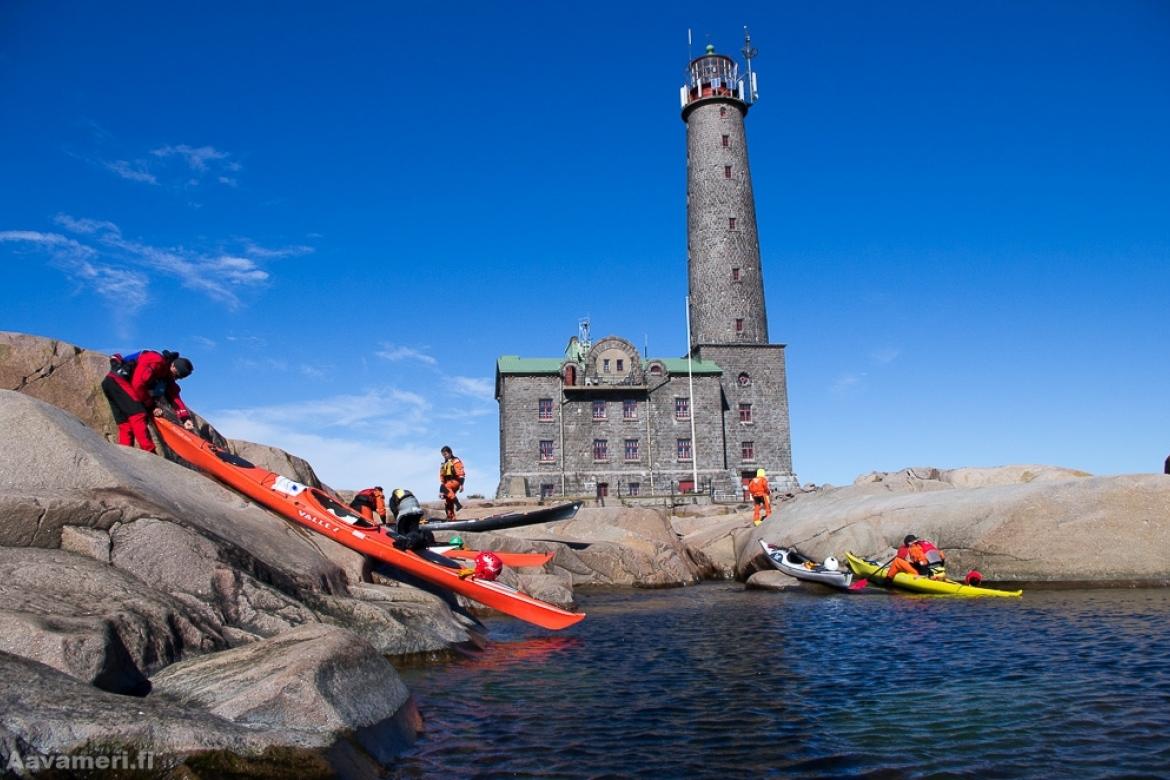 Twenty-five kilometers southwest of Hanko or 15 kilometers south of the Rosala and Hitis islands, at the entrance of the Gulf of Finland stands Scandinavias tallest lighthouse. Towering 52 meters above the sea, the lighthouse of Bengtskär is the archipelago`s most imposing and magnificient monument. This massive stone structure has witnessed many dramatic events in Finland`s history. For nine decades the lighthouse provided a safe passage to the thousands of vessels which plied the waters of the Gulf.

The waters of the outer archipelago were not always so safe. The seas around Bengtskär and the islands of Hitis and beyond were the site of many shipwrecks. It was these very treacherous waters that caused plans to be drawn for an immense Baltic lighthouse. At the Paris World Exhibition in 1900, architect Florentin Granholm unveiled his design for this unique structure. His work was met with much admiration and critical acclaim. However, it was not until the steamship Helsingfors foundered and sank in the Gulf in January 1905 that the Imperial Senate granted the materials necessary to begin the construction.

Construction commenced in early 1906. The island had exellent granite formations. This natural resource was quarried and used for the foundations and facings of the building. By the middle of June, 120 workers and artisans were busily engaged with the living quarters and the lower half of the light tower. By completion, records would reveal that a staggering almost half a million bricks were used in Bengtskär`s construction.

In August 1906 the roof was raised and the framework completed. During celebrations presided over by Senator Otto Donner, the design plans, deeds, tiles, and other important documents concerning the building were placed, with samples of currency in a time capsule and sealed in the wall of the structure.

Work continued on the tower and the 252 steps of the spiral staircase leading up to the reflector room. A special petrol lantern, designed and built in Paris, was brought to Bengtskär and installed atop the tower. On the nineteenth of December 1906 the lamp was lit. Its powerful beam flashed out three times every twenty seconds and could clearly be seen for twenty nautical miles.

During the winter of 1907 a foghorn was installed in the attic of the living quarters. A massive seven meters long horn, which when sounded caused the entire building to shake. However, the discomfort of the lighthouse keepers was a blessing to seamen. The foghorn could be heard for fifteen nautical miles!

A master lighthouse keeper, a machinist and three assistant lighthouse keepers and their families occupied the living quarters. The original group comprised fifteen persons. With the passage of time and the growth of the families the population increased and during the 1930´s there were forty people living on Bengtskär.

LIFE ON A BARREN ROCK

Life on Bengtskär closely followed the patterns of wind and weather. When the weather was calm it was possible to fish, shoot sea birds, hunt for seals or row across to the nearest village for fresh milk. Relatives and friends came for long awaited visits and the pilot ship brought fresh water, petrol and other provisions.

When storms raged and heavy sea pounded the rocks and skerries the island became too treacherous for outside activity. The strong walls of the lighthouse provided safety and comfort during these difficult conditions.

In August 1914 the First World War began. In response, the lighthouse men and their families were evacuated to the mainland, and the lantern was placed in storage. During that same year, two Imperial German Naval cruisers, Magdeburg and Augsburg, subjected the lighthouse to thirty shell bombardment. The granite walls were only slightly damaged.

By the following summer the lighthouse men and their families had returned to their homes on Bengtskär. Since the Gulf of Finland was heavily mined, it was not until 1919 that the surrounding seas were declared safe for shipping, that the light was lit again.

The period that followed the end of the First World War was peaceful for Bengtskär and its inhabitants. The number of children on the island grew so large that a teacher was brought from the mainland to attend to their education.

THE SURPRISE ATTACK OF JULY 1941

In November 1939, Soviet Russian troops attacked Finland. By 1941 the promontory of Hanko was in Russian hands.

The strategic importance of Bengtskär quickly became apparent as Finnish troops on the island could easily monitor Soviet activities. A small force was able to provide valuable reconnaissance and target sighting in the continuing Finnish struggle against the Soviet force.

At one hour after midnight on July 26, 1941, under the cover of fog two Russian patrol boats secretly landed an armed force at the southern part of Bengtskär. The invasion party of one hundred men led by Lieutenant Kurilov had orders for the complete destruction of the lighthouse, so that it could no longer play a role in hampering Russian war activities.

The small Finnish garrison of fourty-one men, including four lighthouse keepers, repelled the first Russian attack. Overwhelmed by a vastly superior enemy force, the brave defenders took refuge in the upper floors of the lighthouse. From there the struggle continued under the command of Lieutenant Fred Luther who was twice wounded during the fight.

From a distance of ten kilometers, batteries emplaced on the neighbouring island of Örö and Granholmen shelled the Soviet patrol boats and the enemy soldiers hiding in the rock crevasses on the island. The early hours of July 26 greeted the arrival of Finnish gunboats and coast guard vessels. Fighter bombers of the Finnish airforce owerflew the island and attacked the invaders. At dawn a force of finnish Commandos from the nearby island of Hitis landed and joined the struggle to repel the Soviet force and relieve Lieutenant Luther and his brave defenders.

After a hard and bloody battle, the small Finnish garrison emerged victorious. But victory was to come at a price. By the following day the battle had claimed thirty-one dead and forty-five wounded from the Finnish ranks. For the Soviets, the abortive invasion was a more costly venture. Sixty troops lost their lives at the hands of the Finnish defence force. Twenty-eight Russians, mostly severely wounded, were taken prisoner.

For the Finns it was a bittersweet victory. During the day of July 27, a Russian warplane overflew the island and dropped a bomb. It struck the living quarters, demolishing the upper and middle roofs, and killing seven of the Finnish defence force.

Intermittent repairs to the facility continued during the post-war period. Finally, the lighthouse was reopened in 1950. The lighthouse keepers returned to the rock, but this time without their families. They rotated in shifts of two for fourteen day periods. Heavy seas and inclement weather conditions would often extend these shifts to a month of long and lonely duty.

THE LIGHTHOUSE IN DISREPAIR

In 1968 the past was finally swept away. A gas lantern was converted to automatic operation and Bengtskär became unmanned. Modernization continued in 1983 with the further conversion of the lantern to wind-powered electricity.

Benign neglect and damage by the savage elements turned the once proud Bengtskär into a damp, cold and hulking ruin. After years of resisting storms, high seas, wind and invasion, Bengtskär was falling victim to "friendly" forces. What damage nature failed to cause was provided by human hands. Vandals defaced both the interior and exterior of the historic buildings.

In an effort to prevent further deterioration, the Finnish Shipping authorities leased the lighthouse to the Pro Bengtskär Association in 1985 with the provison that repairs be made to the entire facility, and that the building be heated year round. Unfortunately, the conditions of the lease were not met, and the facility was re-leased to the current custodian, the Center of Extension Studies at Turku University.

THE RESTORATION OF THE LIGHTHOUSE

The Centre of Extension studies at Turku University has an established Development Centre for the Archipelago. It's aims are the promotion of economic development in the region and the general improvement of employment and living conditions for those who live there. Through the promotion of Maritime-Cultural Tourism the Centre seeks to stress the region´s unique cultural and historic heritage.

Following the signing of the lease, the Centre began planning the repairs. Suggestions for the best future use were quickly solicited and work began. The project was advanced in collaboration with the archipelago District Shipping Authorities, Turku District Manpower Bureau, and Turku District Building Authorities. Financial support was also received from the private business sector.

Renovations were completed in 1995. In conjunction with Turku University´s 75th Anniversary Celebrations, the inauguration of the Bengtskär lighthouse took place on August 18, 1995. This historic monument was reopened to serve its new role as a tourist, conferance, research and education center. The light which had once kept the seas safe for shipping would now shine for the community which saved it.

The Lecture Hall on the lower floor offers a variety of maritime exhibits depicting the history, fauna and flora, and the natural features of the archipelago. The lower floor also houses Finland´s first Lighthouse Museum and a permanent exhibit "Bengtskär 1941", which gives a vivid account of the dramatic hours of the battle for the island. On the first floor in the former living quarters is a cafeteria, post office and a Chapel.

The lighthouse hosts 10.000 tourists each year, including more than 1.000 visitors-in-residence. Those hardy souls who are prepared to brave the 252 steps of the lighthouse tower will be rewarded with a giddy but breathtaking view of the sea.

In the year 2000 the Foundation for the Turku University became owner of the lighthouse. 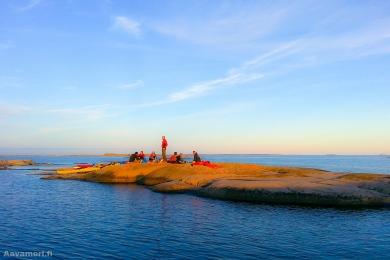